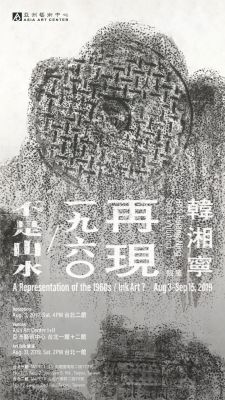 Asia Art Center is pleased to announce the opening of HAN Hsiang-Ning Solo Exhibition: A Representation of the 1960s / Ink Art? on August 3rd, 2019 in Taipei. In the 1960s, the art community in Taiwan underwent a tumultuous and innovative revolution; notably, many “art groups” formed and became idealistic representations of their time. Among them, the “Fifth Moon Group” and “Eastern Painting Group” are the most well-known and influential ones, whereas this exhibition features one of the founding members of the “Fifth Moon Group”, Han Hsiang-Ning. The duo-themed exhibition will be simultaneously displayed at gallery’s two venues: A Representation of the 1960s at Asia Art Center Taipei I and Ink Art? at Asia Art Center Taipei II. Together, the two themes revitalize the outlook of Post-war art in Taiwan during the “1960s”, where the exhibiting artist fully immersed himself in the radical art movements of the time, drawing stimulus from the surrounding environment to enrich his own creative endeavors. His recent series reflecting on personal journey will also be showcased, highlighting a dialogue through time and his ongoing enthusiasm of artistic creation.
Han Hsiang-Ning’s Representing 1960 series is a reproduced digital print of his paint works of the 1960s, applied with a thin layer of acrylic and varnish over the images; nevertheless, the images of the selected reproduced works are further simplified into symbols of time, hence recalling the significant circumstances of their creation. Meanwhile, the other digital print series The Rain, Not Ink contrasts the overlaying pattern formed randomly by rainwater trailing on the ground to that of an abstract ink painting, where the vague presence of the artist’s touch and nature become ambiguously compelling. The two series are comparable in their detachment from the artist’s interference and subjectivity. The artist’s converted role from a participant to an observer gave rise to the prominence of the involved matter; therefore, the materiality and sense of time are shown as subjects of their own, and Han’s philosophy on perspective is likewise revealed subtly.
The venue also features two of Han’s experimental film works from the 1960s, Run and Today, where the exhibition space is specially designed to provide an engaging experience with the content. In his appropriation of John Cage’s work 4’33’’, Han drew inspiration from aleatoric music and specifically edited the work Run to four minutes and thirty-three seconds. Upon watching, the audience’s voice and behavior also serves as a background to the film, becoming a part of its narrative’s space and time. Run is an ingeniously made homage to 4’33’ that crosses over between music and film to evoke new meanings through multi-senses. Meanwhile, Today portrays the act of doll playing as an allusion to adolescent sexual fantasies; moreover, images of the film will be projected in overlap to seduce the audience into a trancelike state between reality and fantasy.
In 1965, the precocious twenty-six-year-old Hang Hsiang-Ning proposed the punny idea of “Not a thing / Not East-West”, at the “Existence Club” of Taiwan University. At that time, he foresaw the East-West distinction would disappear in the discourse of contemporary art, since many of Western abstract paintings have already incorporated elements of Eastern art. This prediction is proven and accelerated by the rapid sharing and access of information today. Furthermore, his ongoing series Travelers Among Mountains and Streams since 1998 has manifested this concept of global culture without East-West distinction. Modeling Northern-Song Dynasty artist Fan Kuan’s Travelers Among Mountains and Streams as the composition prototype, Han re-introduces his paint roller painting techniques of the 1960s to make semi-automatic prints of different ground textures as he travels around the world. By this, he assumes the role of the traveler in the original painting, whose ceaseless effort of personal exploration is evidently shown through his ideas, fulfillments and compositions themselves. Unbounded by the artistic distinction between East and West, as well as the barriers of tools and media, he re-constructs a new dimension of space and time that coerces the audience to imagine a new definition of painting - Ink Art, or Ink Art?
Han Hsiang-Ning Solo Exhibition aims to create a narrative between the artist’s early avant-garde and diverse conceptual works, and recent works that reflects on personal historical course. The exhibition is set to represent the 1960s, a turning point in time with significant meanings. The exhibition will be on view till September 15th.
About Artist
Han Hsiang-Ning was born in Chongqing, China, in 1939. In 1961, He graduated from the Art Department of Taiwan Normal University and joined the “Fifth Moon Group”, positioning himself as an early pioneer of modern art in Taiwan. His early works featured abstract paintings of form and space, and he also developed a fervent interest in experimental film, thus producing the work Run with a super 8mm film in 1966. Han moved to New York in 1967, and with the influences from Minimalism and Pop Art, he began to integrate Pointillist and Photorealism techniques into his compositions; eventually, the combination transpired into his spray gun series “Extreme Light” of the 1970s, which cemented his status within the Photorealism movement. Nevertheless, Han sought for expressions beyond paint and canvas, where he would explore Pointillist compositions with mixed media such as ink, paper, and digital images. In 1998, He again started to use paint rollers in compositions while traveling around the world, where he would rub textures of different grounds onto the works as evidence of the travel, enhancing the works with both painterly qualities and the sense of time.
Han Hsiang-Ning has served as Artist-Instructor of the Graduate Program at NYU, Guest Professor at the School of the Art Institute of Chicago and St. Thomas Aquinas College of New York, and Guest Artist at the Division of Fine Art at The Chinese University of Hong Kong and the School of Creative Media at City University of Hong Kong.