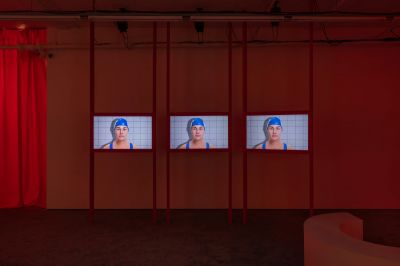 Sara Cwynar’s latest solo exhibition at Foxy Production is a new six channel film, “Glass Life.” The work is an immersive, multi-voiced meditation on the relationship between images and the self. On differently sized projection screens, the film travels through advertising, art, fashion, design, philosophy, and politics, while three digitized swimmers on monitors act as witnesses and audience members. Contemplating the limits of nostalgia and memory, “Glass Life” looks back, to the present, and forward, often all at once, as it poetically figures the ways images can both threaten and give pleasure.
The work’s title derives from philosopher and psychologist Shoshana Zuboff’s recent book “The Age of Surveillance Capitalism.” Zuboff characterizes our current digital era as one where we live our lives behind glass, where everything we do is surveilled and privacy is almost impossible, and where the only resistance is “the art and science of hiding.”
“Glass Life” is a dynamic configuration of images and video accumulated over the years on the artist’s hard drives. From her studio, the artist uses her computer and various studio set ups to make sense of her visual archive—and the world outside. Luscious pictures of food, political figures, screen idols, sportswomen, Instagram models, grand artworks, cartoon characters, emojis, and self-portraits, among many other images, vie for our attention. This montage is overlaid by a broad range of references, including from Euripides, Plato, and Shakespeare; through Albert Camus, John Maynard Keynes, and Virginia Woolf; to Frantz Fanon, Luce Irigaray, Kobena Mercer, and the artist herself.
Perspective, scale, and time feel askew, as the work’s signs and symbols wash over us. Flatness and depth are intertwined as still and moving images converge: photographs swipe by as a conveyer belt of industrial goods moves on with an almost independent spirit. As words and images dazzle, the work’s abundance produces an anxious feeling of visual over-stimulation, tempered by the artist’s drive to synthesize the myriad elements she presents.
Picturing a kind of simulation of subjectivity, Cwynar figures contemporary relations revolving ever more reductively around consumers and producers; yet, at the same time, signifying beauty and freedom, she captures a swimmer floating effortlessly above it all. The artist suggests that, throughout history, cycles of seductive images have been used to ensnare us in an ongoing matrix of desire and consumption; yet, she also intimates that a key to extricating ourselves from this bind is a thirst for inquiry and knowledge.
Sara Cwynar’s films and photography have been described as building on the legacy of the 1980s Pictures Generation. The artist is interested in how design and popular images work on our psyches, in how visual strategies infiltrate our consciousness. She considers how familiar, often sentimental images smooth over unpleasant realities, to cover up “the systems of control embedded within our social, economic, and political lives.”
Sara Cwynar (Vancouver, BC, Canada, 1985) currently lives and works in Brooklyn, NY. She holds an MFA from Yale University, New Haven, CT, and a Bachelor of Design from York University, Toronto, ON, Canada. She studied English Literature at the University of British Columbia, Vancouver, BC, Canada.
Selected exhibitions include: “Source,” Remai Modern, Saskatoon, SK, Canada (solo) (2021); “Collection 1970s–Present: Search Engines,” MoMA, New York, NY (2020-2021); “Sara Cwynar,” The Aldrich Contemporary Art Museum, Ridgefield, CT (solo)(2019); “Image Model Muse,” Milwaukee Museum of Art, WI, and Minneapolis Institute of Art, Minneapolis, MN (solo)(2018-2019); “Tracy,” Oakville Galleries, Oakville, ON, Canada (solo); 33rd Bienal de São Paulo, Brazil (both 2018); “Soft Film,” MMK Museum für Moderne Kunst, Frankfurt, Germany (solo); “Subjektiv,” Malmö Konsthall, Sweden (both 2017); and “Greater New York,” MoMA PS1, Queens, NY (2015-2016).
In 2021, Sara Cwynar will present a new commissioned work at Performa, New York. In 2019 MoMA New York commissioned Cwynar to make a series of films that stream on the museum’s website and social media platforms.