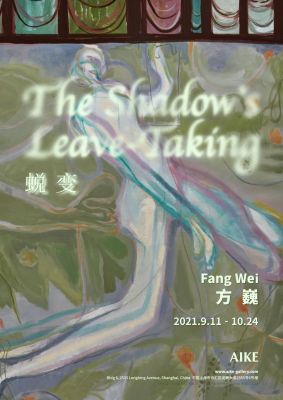 It is usually a pile of figures sprawled across the canvas. Hidden inside are characters, sometimes stretched, sometimes curled up, sometimes intertwined and twisted together, or in some other postures. They often show a boundless joy, carelessly thinned and elongated, outside all restraints. At other times, they seem to be the ego coinciding with the ego's doppelgänger winding tightly and spiralling toward itself at an ever-increasing speed. Sometimes a shell of an extremely solitary figure has been forged. The body inside the shell searches for gaps along the contours and spills out from one of the escape points, sprinting along with the tips of the grass in the wilderness. The body spasms and trembles as it escapes from within so that the image presents a thrust from the inside out.
Fang Wei painted many figures in pairs, gnarled tree roots and gaudy flowers, yet did not tell any story. Through the narrow passageway, daylight is blocked into the mysterious green box. Everything goes dark. The exhibition invites the viewer to shed preconceptions about the composition and technique of easel paintings, but instead, the naturalists would say, returning to sensation and instinct. Under the action of unseen forces on the nervous system, it is no longer possible to identify whether the overlapping shadows in front of us are symptoms of double vision or some haunting, entangled spirits. However, from what we can see, the narrative unfolds in the relationship of interdependence, division and confrontation between "form–subject" and "shadow–object". The story slips in silently.
Modern Chinese writer Lu Xun once described a dream—the shadow came to bid farewell to its form, saying that it did not want to wander between light and shade anymore; it would no longer follow people and would rather enter the darkness.[1] Facing the world losing order and things falling apart, the literati's "wander[ing] in nothingness" a hundred years ago seems to echo the chaos and ignorance of the present situation.[2] Though unable to conceal the uneasiness during the post-epidemic era, the artist refuses to sink into the confusion due to the sudden external environment change. He continues to live in seclusion on the island, with a determination not to lose his fighting spirit and iterates a new form of life: a more ambiguous world where beauty and danger are mixed.
After all, Fang is an artist who grasps the rhythm of life through visual language. In addition to the figures and shadows as the subject matter, the large natural scenes composed of passionate, solid streams of colour occupy the rest of the picture. Distortion and tension create the underlying texture of Fang's works, achieving an illusionary, disorienting effect. The capture of the overflowing nervousness must be translated into an ecstatic life force. Light and shade, reality and illusion, advance and retreat, life and death, are two sides of the same coin, which is coupling with what Gilles Deleuze said when talking about the hysterical nature of painting, "Abjection becomes splendour, the horror of life becomes a very pure and very intense life.”[3]
Text/Huirong Ye
[1] Lu Xun, “The Shadow’s Leave-Taking”, 2014
[2] Ibid.
[3] Gilles Deleuze, Francis Bacon: the logic of sensation, “Chapter 7: Hysteria”, p. 52, Continuum, London, New York, 2003.
ABOUT THE ARTIST
Fang Wei was born in Shanghai in 1968 and graduated from Shanghai Arts & Crafts College in 1986. He now lives and works on Chongming Island, Shanghai. Fang’s recent solo exhibitions include “The Shadow’s Leave-Taking“, AIKE, Shanghai, China (2021); "Morningtide", AIKE, Shanghai, China (2018); "Hidden Earth", Richard Koh Fine Art, Kuala Lumpur, Malaysia (2016); "Assassin", BANK, Shanghai, China (2014); Fang Wei solo exhibition, Shanghai Gallery of Art (SGA), Shanghai, China (2012).