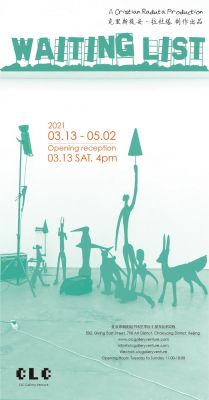 On the occasion of the 2021 edition of Gallery Weekend Beijing, CLC Gallery Venture is pleased to present Waiting List, Cristian Răduță’s first exhibition with the gallery, also the artist’s first solo presentation in Asia. The exhibition includes Răduță’s sculptural works created in 2021 amidst the global pandemic, and in its thematic totality considers in a distinctively dark humour fashion the notion of the waiting list, as it manifests in the context of the global art market, in the ongoing global vaccine crisis, in a Beckettian struggle in vain, and in the continued heroic anticipation of a cosmic way out for lives on earth.
Known for sculpting fantastical, anthropomorphized animals and figures in chiefly aluminium combined with found objects, Cristian Răduță (1982, Bucharest) has developed in the last decade an artistic practise that proposes novel and playful ways in which organic and animal beings are re-constituted. Colourful, animate, agile and bricolage-like, the rabbits, foxes, turtles, flamingos, penguins, rhinoceroses, mammoths and even skeletal dinosaurs are ever-ready to pounce, to prey, or to live and work as a Mary Poppins, a keen skier, or as an art handler with a trusty trolley. The abstract, cartoonish and immediately recognisable sculpted forms of the animals charged with cultural and political references contribute to the spontaneous growth of an uniquely haphazard community, in contrast to another community Răduță continues to nurture over the years: a looming arsenal of rockets, missiles, spacecrafts that revisits the modern idea of monumentality, the history of super human aerial and outer space military endeavours, and Cosmist ideals and realities. The two strands of sculptural practise - one adorable, organic and innocently domestic, the other cold, technological and potentially destructive - pertain comprehensively to the host of challenges and crises the world is facing in the 21st Century.
For the Waiting List, Răduță constructs in the space of the CLC Gallery Venture a theatrical scenario, in which a herd of sculpted animals gathers around an imposing monumental form, topped by a feline, reminiscent of either Laika, the dog that was sent into space in 1957, or of a classic Mary Poppins gesture, or of a human canonball. The delicate and fragile nature of the situation in its totality is revealed, as the erect rocket-like centrepiece assumes the textured appearance of a bamboo. The choreographed combination of the natural-animalistic and the military-technological captured in an upward and indeed outward, departing movement pertains to the titular theme of the exhibition: waiting aggressively, anxiously or carelessly, anticipating either a chance to buy, in a irreversibly capitalist system; or a chance to buy out, a salvation in the form of an extraterrestrial escape, a fantastical, magical way out of the conundrum that is the world today.
Cristian Răduță (1982) lives and works as an artist in Bucharest, and is a co-founder of the Sandwich artist-run gallery space. His artistic practice includes sculptures, objects and installations that start from hypothetical, sometimes absurd situations and characters which are humorously employed. He is interested in the relationships and tensions that form among the various industrial and bricolage materials he uses. His works have been shown at Museum of Contemporary Art Zagreb, Salonul de Proiecte Bucharest (duo with Dan Perjovschi), Museum of Sculpture, Krolikarnia Palace, Warsaw (2017) and The National Museum of Contemporary Art Bucharest (2014).