Light Between The Lines (group) 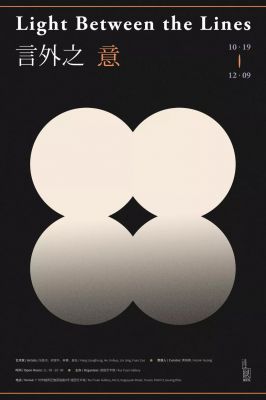 Art works, as an extension of language expression, whose truth and one of the functions is to get into people’s sight, minds or lead people to think about and respond to the information that cannot be conveyed by language, and to perceive the meaning between lines. In this exhibition, we may explore the essence of abstract art through the works of four artists, Feng Lianghong, He Jinhua, Lin Jing and Yuan Zuo, and perceive the light and line, time and space that beyond the sight of our naked eyes.
Feng Lianghong’s works are like the process of thick fog dispersing in the chaotic world. Clearly and peacefully, the picture in mind widely unfolded under layers of colours among the reverberating aura. The seemingly monotonous hues of black, white and grey demonstrate Feng Lianghong’s state of life, sometimes peaceful, sometimes drastic, sometimes unstrained and free. He not only attaches importance to the overall structure of the work, but also pays attention to the details, which give his paintings the delicate penetrating power. The isomorphism between the inner spiritual state and the external representation of painting also gives the temperature and rhythm of life to his works. The artist’s feelings and mind are conveyed through the colours and lines.
Representation and abstraction are only materials and different carriers of the inner world. The co-relations between the multiple elements of the works and the multi-layers of semantics behind the works constitute the core of the construction of He Jinhua’s works. He is good at creating different styles of works with different materials, and interpreting emotions and thoughts of individuals in different periods. The series of works exhibited this time is undoubtedly his questioning of reality, and his deep thinking on human nature, society and environment. The appearance of the character has the grotesque and interesting taste of black humor. The long nose is not only a metaphor for lying, but also a conveyance of the state of suffocation. He uses the magic wand of “beauty” to touch upon the weight of the reality and bring about a poetic and thought-provoking drama.
Beneath the ebullience and drastic appearance of Lin Jing’s works, there is a wisp of elusive rational restraint. At the same time, the works also reveal the romantic and delicate nature of women. Colours are overlapped and blended, strokes are random and smooth, infinite information is seemingly intentionally hidden by her, and it makes people more eager to identify and interpret the thoughts or meaning behind it. She often uses arc-like strokes which are similar to body languages to construct a spatial structure and sense of weight. They make her works more powerful and reflect her professional skills in sculpture and design accumulated in Lin Jing’s long-term practice.
Exploring and defining light, speed, space and direction is the theme of Yuan Zuo’s painting. He hopes to integrate his inheritance of oriental painting tradition and the understanding of Western painting into his creation, so that to explore the essence of painting language and the instinct of creation. In his works, light and shadow are merged with free and improvised lines, colours and various materials are collaged, a new spatial consciousness and logical relationship are thus established, and the impulse of creation is expressed through subconscious and the painting language itself. The juxtaposition of the bright picture and concealed information conveys the metaphorical connotation in the game of colour.
These works brought to us by the four artists seem to form a question worth pondering, whose essence lies not in its picture, or its technique, but in the content of it and its infinite extension and expansion. These works give us each a reason and freedom to tell the story.