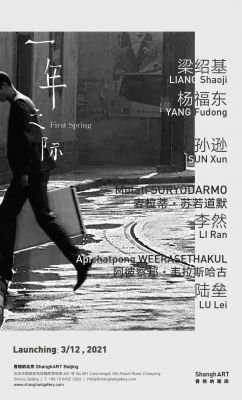 Opening on 12 March, 2021, the first chapter of our special project ‘First Spring’ will present a work of the same name by Yang Fudong, and ‘Sound of Heart’, a work by Liang Shaoji.
Continuing the consistent non-linear narratives in Yang Fudong's work, ‘First Spring’ was completed in 2010 using 35mm black and white film. It reveals a series of incredible daily encounters between figures from different countries and times in the prosperous Old Shanghai. This film creates a psychedelic, interlaced world, while its subtle greyish tone suggests the confusion and alienation related to urban reality. However, the paradoxical sense of dreams is actually the illusion that occurs during filming in the studio. As Yang Fudong said, “The early spring is like an uncertain state when the sun is about to rise. The plants in the soil have sprouted; it’s not about breaking up the soil, but about the inner surge.”
Likewise, Liang Shaoji describes the inner surge as ‘the ineffable sound of soul’ in his 2014 large-scale space installation ‘Sound of Heart’. This work allows us to experience a heavenly sound, which is created by ‘nothingness’, and more specifically refers to the sound that nature emits without any human activity. For instance, Tao Yuanming’s stringless Guqin might be simply a piece of wood, resembling the shape of Guqin without any strings. It cannot produce any actual music, but when hung up or placed beside a common Guqin, it can still transmit profound implications, namely ‘the ineffable sound of soul’.
The rows of cut bamboos appear to be pan flutes that might start to sound at any moment. They rise up in a particular order like various syllables, while their colours—green, yellow or black—imply different tones. A ‘silent’ sound echoes throughout the exhibition space.
Whether the treatment of material and colour or the presentation of content, both works demonstrate a strong sense of traditional Chinese aesthetics and philosophies. In terms of working methods, they also open up a multi-dimensional discussion on modernity and extensibility. Juxtaposed together in the exhibition, two different types of works naturally form some sort of visual and spiritual unity.