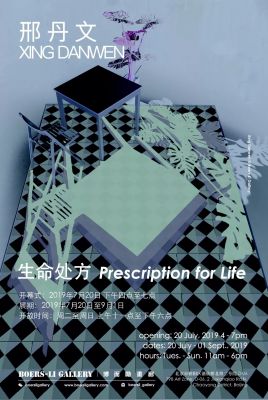 Boers-Li Gallery is delighted to present Xing Danwen’s solo exhibition, “Prescription for Life”, opening on July 20, 2019. The exhibition will include the artist’s most recent performance based videowork and installations.
Xing Danwen, with an education in painting, explored the medium of photography as early as the end of the 1980s, whose earlier career focused on journalistic photography, and is particularlly known for documenting various artists and events domestically and performance art mainly in Beijing East Village throughout the 1990s. Her art practice addresses issues ranging from social conditions, female identity, the impact of urbanization on individuals and etc.
In recent years, Xing Danwen’s interest rests on the tenuous relationship between urban space and private space, and the individual’s existence in such environments. With the rapid pace of urbanization, the improvements on living conditions, material abundance, inflated passion for consumption, have invariably offered possibilities and pursuits, while they’ve also conflated people’s desires. Thus, how much can boundless desire be fulfilled and pursued? Although these enriching circumstances might have introduced wonders and happiness, they’ve also placed urbanites into various kinds of predicaments. "How can we lead better lives?" becomes the focus of our everyday life, which is also symptomatic of urban living.
Eponymous to the title of the exhibition, the 12 mins performance video zooms the camera lens on the artist, whose actions progressed from rationing pills and capsules out of numerous unlabeled bottles onto small dishes, to taking the medicine at a timely fashion, to eventually devouring them compulsively with water to the point of retching and gagging. The pills and capsules here are not to imply curing diseases, instead, they represent people’s overloaded desire and whether they have the capacity to bear it. Through the discomfort of the artist's physical reactions to devouring these pills and capsules, an individual is tormented from knowing the possibility of attaining an ideal, her conflated desire and determination in achieving it, as well as the compromises made in the process, are made apparent. Furthermore, the video points to an embedded ideal: how can one live a good and lasting life. Hence these pills and capsules injected are not only meant to satisfy its essential function of alleviating symptoms and curing diseases but also as elixirs that would satisfy all other wants and desires. Ultimately, the artist's performance driven by such urban illusion addresses the denial of aging and the fear of confronting the issues on life and death.
Stemming from her previous works Urban Fiction (2004 – present) and Wall House (2007), that sampled objective perspectives – where the images on the scenarios and the individuals living in urban environments are captured at a critical distance, then the installations together with the performance based video, invite the viewers to grasp an up-close and personal experience of interior spaces where the artist’s subtle interventions have been left on the objects and the setups. Xing Danwen captures her own shadow as a mark of alienation these isolated personal spaces and translates them onto large dimensional handicraft carpets (Untitled, 2019) to conjure a state of being and mood of urban dwellers. Furthermore, the lighting of the interior space, generating a delirious artificiality to enhance the illusory, or even at times the fictitious effects from the widespread disconnect between the individual and his/her physical and social environments.
Xing Danwen, born in Xi'an, China, currently lives and works in Beijing. She received her BFA from the Central Academy of Fine Arts, Beijing, China in 1992, and completed her MFA from the School of Visual Arts, New York, in 2001. Xing Danwen, actively engaged in the international art scene, her works have always been on a cutting edge position in contemporary Chinese art. As an outstanding photographer and new media female artist, her works are mentioned in renowned academic journals and by respectable art critics, as part of the academic discourse in the international art world. Her works are included in important volumes about contemporary art, and have been shown in various international biennales and triennales, such as the Sydney Biennale, Whitney Biennale, Yokohama Triennale, The Metropolitan Museum of Art, International Center for Photography, J. Getty Art Museum, Centre George Pompidou, Victoria and Albert Museum, the Boijmans Museum in Rotterdam and etc. In addition, her works have been collected by these aforementioned institutions, as well as by notable private collections such as the Uli Sigg collection, Swiss Bank, Foundation Nationale Art Collection. In 2017, she successfully held a retrospective at Beijing’s Red Brick Museum. In 2018, she was awarded with the Silver trophy for the Best Artist of the Year by AAC. In the fall of 2019, the acclaimed international publication Prestel plans to publish a catalog comprised of the artist’s 25 years of artistic practice.