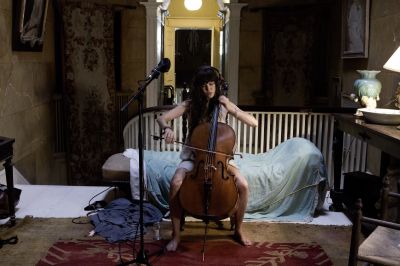 The Visitors (2012) is a nine-channel video installation featuring the artist and his friends singing and playing music in an old American mansion. The score was composed by Kjartansson in collaboration with Davíð Þór Jónsson. The lyrics of the song Feminine Ways are from a poem by Icelandic artist Ásdís Sif Gunnarsdóttir.
The hour-long musical performance was shot in one take. Each performer was filmed in a different room – the library, study, music room, bedroom, bathroom, and so on – simultaneously, but separately. The performers could hear each other via headsets. In the exhibition, the sounds and images are merged so the audience hears all nine musicians performing as an orchestra. The group includes some of the top performers from Iceland’s music scene, with members of bands such as Sigur Rós and Múm. The artist himself takes part in the work, playing a guitar in the bathtub.
For Kjartansson, making music together with friends was the key point of this project. All nine videos are portraits of the artist’s close friends, but the work also deals with his divorce and a sense of ending. At the end of the video, the musicians step out of the mansion and walk onto the lawn together with the mansion’s real residents.
The title of the work, The Visitors, is borrowed from the final album by the Swedish pop band Abba (1981). Kjartansson is inspired by the music of Abba and the melancholy streak disguised behind their commercial pop sound.
The performance was recorded in the rooms of the great nineteenth-century mansion of Rokeby, on the Hudson River in Upstate New York.
"It's really a piece where you can walk through and just see those [as] singing paintings, say 'okay' and walk out, or you can just linger into and be immersed in all of its seductive sentimentality", describes Kjartansson.
In addition to The Visitors, Kiasma presents another work from Ragnar Kjartansson, magnificent neon light installation Scandinavian Pain (2006-2012), which is also visible from outside.
Ragnar Kjartansson was awarded this year’s Ars Fennica prize which is the most significant art prize in Finland. The Director of the Museum Tinguely in Basel, Roland Wetzel, selected the prize winner. In his statement he refers to Kjartansson’s artistic practice as well as the topics he
“New forms of reconfiguring established modes of representation, humour and irony in questioning conventions, and the relevance of sound and music as ‘auratic’ aspects in creating specific space-time and collaborative experiences.”
The Visitors is part of the Thyssen-Bornemisza Art Contemporary (TBA21) collection. Scandinavian Pain belongs to the collection of The National Gallery of Iceland.