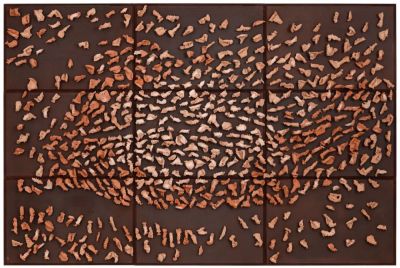 Marian Goodman Gallery New York's exhibition by Penone features a series of canvas works titled Leaves of Grass (2013) which are being shown for the first time, alongside individual sculptures made concurrently (2014-2015), and a series of drawings (2014).
The canvas works in the North Gallery take as a point of departure Walt Whitman’s first edition of Leaves of Grass (1855), currently on loan from The Morgan Library. Penone’s Leaves of Grass is comprised of twelve canvases in total which correspond to the twelve original poems of Whitman’s first edition. Six of the works are presented here and a selection will be included in a forthcoming exhibition at the Bibliothèque Nationale de France (BNF), Paris in the Fall of 2021.
Initially inspired by images from the natural world, Penone found himself drawn to the verdant cover of Whitman’s first edition, which was printed, bound and set in type by the young poet in 1855 and has been in contact with Whitman’s hands. Penone finds meaning in the correlation of a leaf to a fingerprint; a fingerprint to the surface of a book; and the hue of the book to nature, perceiving green as an equilibrium between light and shadow. Scaling each canvas to a ratio echoing the first edition, he enlarges the work seven times in relation to its original object. Whitman’s verses, analogous to a single breath or gesture, create a natural correspondence for Penone: “Words that are breaths, breaths that evoke thoughts, thoughts that are impressed on the mind like the marks left by hand on the surface of things, infinite traces bearing witness to our identity.”
Each of the canvases in Leaves of Grass is initiated by touch, the principle of cognition and creation, which the artist conceives as a ‘sign, order, thaumaturgic gesture, or projection of a thought.’ Beginning with an imprint of the finger, he adds another, with every ensuing impression becoming a unique and distinctive mark unlike the previous, akin to Whitman’s blade of grass as a uniform hieroglyphic. Multiplying into an infinitude of 70,000 accumulated imprints, the canvas’ active surfaces metamorphose into vast landscapes resembling the foliage of trees.
Punctuating each vista is a small terracotta sculpture formed from the gesture of clasping a handful of earth, from clay sourced from lands across the United States. Drawing not only on Whitman’s ‘hopeful green stuff woven” but earth itself as memory, these fired clay elements reinforce the Penone’s sculptural intent and his principle that one needs to touch the earth to activate it.
In the North Gallery Viewing Room, Leaves of Grass in the Hands, a 2014 drawing made from graphite rubbing on paper mounted on silk and made from a first edition of Whitman’s book, returns Penone to frottage, a process utilized in early and recent canvas works with vegetal pigments.
A series of drawings titled Foglie (Leaves) from 2014 reiterate the notion of landscape as an expanse of imprints. Each work on paper traces indexical gestures, imprints in ink and pigment which carry the memory of an action, in dialogue with collaged leaves and vegetal forms. To Penone, the Foglie drawings depict “a drapery of the forest’s leaves, each unique, absolute, unrepeatable, which redress the forest’s body like skin.”
In the South Gallery, the 2015 bronze sculpture Artemide (Artemis) bears a twofold identity, being the cast of a real tree and evoking at the same time the female body as the title suggests, implying nature and fertility, interior and exterior, positive and negative forms.
“Artemide is a sculpture that evokes the human body with its volumes and its dimensions and that shows how close the tree is to us in some details of its form. The relationship between void, absence, and solid, presence, can prompt us to think about the precariousness of our existence, but the figure of the tree trunk bears witness to the fertility and vitality present in the myth of Artemis and in nature.”
— Giuseppe Penone
Nearby are the Indistinti Confini -Contatto (Indistinct Boundaries .Contact) works from 2015: trees of carved marble which ‘hide’ a bronze core, they explore boundaries between positive and negative as well as the sculptural process itself, the bronze invoking the memory of a wax mold.
“The fascination and the fear stirred by the continual mutation of nature makes me think of humanity’s interference with the living things of the world and how it is ignorant of the fact that it is itself part of nature.”
— Giuseppe Penone
Avvolgere la terra—corteccia (To Envelop the Earth -Bark), from 2014, is an enlarged version of the terracotta forms shaped from the grasp of the hand — an antecedent to the clay elements in Leaves of Grass. More monumental in form and released from its pedestal, the terracotta sculpture rests on a horizontal bronze plane that is a direct cast of the surface of bark. On an adjacent wall, Terre (Earths) (2015), comprised of nine iron panels, appears as an earthen landscape of terracotta fragments formed from the imprints of gestures.
图片
About the artist
Giuseppe Penone was born in Garessio, Italy in 1947. He is the recipient of the McKim Medal (2017) and the prestigious Praemium Imperiale International Arts Award for Sculpture in 2014. Giuseppe Penone has exhibited at Documenta V (1972), VII (1982), VIII (1987) and XIII (2012) and at the Venice Biennale in 2007, 1995, 1986, 1980, and 1978.
His upcoming projects include solo exhibitions which will be held at the Uffizi Galleries, Florence, Italy in June 2021, and an exhibition at La Biblioteque Nationale, Paris, opening October 13, 2021 and running through January 17, 2022.
Giuseppe Penone’s recent solo exhibitions have been at the Saarlandmuseum, Moderne Galerie, Saarbrücken, Germany (2020); Centre Pompidou Metz, France (2020); Palais d'léna -CESE, Paris, France (2019); Yorkshire Sculpture Park, Wakefield, UK (2018); Chateau La Coste, Le Puy-Sainte-Réparade (2017); Palazzo della Civilità, Rome (2017); Louvre Abu Dhabi, UAE (2017); MART, Rovereto (2016); Rijksmuseum, Amsterdam (2016); Nasher Sculpture Center, Dallas (2015); Musée Cantonal des Beaux-Arts, Lausanne, Switzerland (2015); the Beirut Art Center, Lebanon (2014); the Musée de Grenoble, France (2014); the Château de Versailles, France (2013); Kunstmuseum Winterthur (2013); Madison Square Park, New York (2013) and Whitechapel Gallery, London (2013).