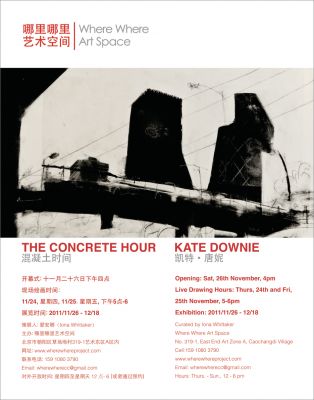 Kate Downie works on the principle that no space is denied the right to be poetic. Her approach surpasses hackneyed musings on ‘urban poetry’ that find beauty and contemplation underlying the noise and impersonality of contemporary cities. Since her 1989 performance piece amid ‘la circulation’ in Paris, her practice has shown an unusual fascination with road junctions, borders, barriers and the spaces between buildings which human beings habitually negotiate and traverse. To the artist’s mind and medium – here a live drawing in charcoal and ink – the physical experience of a city entails its own artistic language. Like a huge pulse, its iambic meter is advanced and disrupted by myriad wheel movements, neon lights and the rhythm of pedestrian strides marking endless small migrations. Arriving in Beijing from her native Edinburgh last year, and having returned this autumn, the artist meets a city whose fabric spans a rupture between the teeming, irregular accumulation of human life and possessions in narrow hutongs and the overarching, regular forms of skyscrapers and apartment blocks erected beside vast roadways. In Beijing, she finds, there is no ‘middle scale’ such as people are accustomed to in Europe: only cramped vs. consuming spaces in which the public appears as a now-outsized, now-dwarfed cast.
This live drawing on the walls of Where Where Art Space is Downie’s response to the opposing environments in which we find ourselves in Beijing. Against their separation in reality, she literally draws together a hutong crossing and a multi-lane junction so as to place them on the same plane, inverting their relative scale and ours in relation to it. The drawings are directional, synonymous with the rush and pause between architectures. Thus, the two sides of Beijing’s urban landscape are made to face each other. Poetry need not solidify images, but can exist alongside them to express instances and shifts. The visual artistic language witnessed here is temporary, awaiting erasure even as it unfolds.