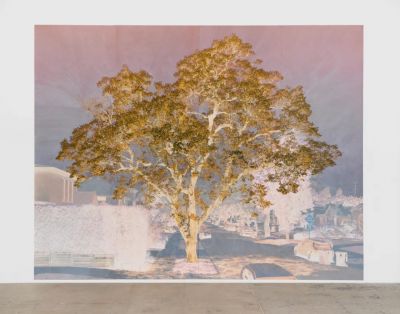 Marian Goodman Gallery is very pleased that our Fall season opened with an exhibition of new works by Tacita Dean. The show includes a range of works in multiple mediums, including photogravure, large-scale photographs, silkscreen prints, two new 16mm films, slate drawings and a new box edition, nearly all inspired from her time living in Los Angeles, from 2014 to the present.
The exhibition unfolds around a new body of work made in association with ‘The Dante Project,’ commissioned by The Royal Opera House in London to create new designs for The Royal Ballet, which will premiere in October 2021. Centered on Dante’s Divine Comedy, with new music by Thomas Adès and choreography by Wayne McGregor, the ballet is structured in three parts: Inferno; Purgatorio; and Paradiso. Dean represents these three realms of Dante’s journey in an inspired odyssey through various mediums and means of representation, with works that move from drawing to photography and film; from negative to positive, representation to abstraction, and monochrome to color.
A parallel journey begins in the North Gallery with a new large-scale photogravure in eight parts, Inferno (2021). Produced by Niels Borch Jensen, it exists in dialogue with the monumental 40-foot blackboard by the same title which served as the master for the backdrop of Inferno (and will be shown concurrently in the Paul Hamlyn Hall at The Royal Opera House). Using collaged elements for the first time, including black dots to represent the figures of Dante and Virgil as they progress through the circles, Dean signifies upper and lower realms through positives and negatives, blacks and whites.
Purgatory, the middle state, is depicted here as a transitional state between negative and positive, a concept developed in the five striking large photographs on view, each scaled in proportion to their original subject: jacaranda trees in Los Angeles. Beginning with large negatives of each tree, Dean created internegatives in order to reverse each into a photographic print, with violet blooms transforming into an otherworldly green. This strange intermediary state is accentuated by the artist’s meticulous hand-coloring in around the trees with white crayon.
A series of 10 handmade 15-color silkscreen prints represent Paradise through spheres and abstract forms which refer to the various celestial stages of Paradiso. These are taken from Dean’s 35mm anamorphic film, which will be shown on the stage in the final act of the ballet.
In the South Gallery, two new 16mm films will have their premiere in this exhibition. One Hundred and Fifty Years of Painting (2021: 16mm color film, continuous loop, optical sound, 50 ½ min) continues Dean’s tradition of artists’ portraits using the medium of film. Luchita Hurtado and Julie Mehretu, who in 2020 would have shared a birthday exactly five decades apart, are shown here in dialogue in a moving double-portrait. Filmed in Santa Monica on 3 January last year, the film features a congruence of lives which have overlapped in serendipitous ways, with musings on painting, motherhood, nature/ecology and more.
Two new slate drawings, Panselinos (2021) and The Great God Pan is Dead (2021) are shown in conjunction with the new film Pan Amicus (2021: 16mm color film, continuous loop, optical sound, 31 min), which was commissioned by the Getty Center, Los Angeles, where Dean was in residency from 2014-2015.
In our Third Floor Project Room, Dean presents two projects completed over the past year: Significant Form (2021) and Monet Hates Me (2021). Significant Form is comprised of 130 photographs taken of Dean’s found postcard collection. Presented without attribution or explanation, Dean's free-flowing constellation is a pleasure of images that encourages us as viewers to follow our own readings and associations and find our own significance in the forms we encounter in the world around us.
Designed as ‘an exhibition in a box,’ Monet Hates Me (2021) is an edition of one hundred clothbound and foil embossed boxes, each containing fifty objects, some unique to each box. The source material was found by Dean in the Getty Research Institute Special Collections. On her first visit to the collection, she pointed randomly to a cardboard box on a high shelf, which turned out to contain the key to Auguste Rodin’s studio entrance in Hôtel Biron in Paris. During the COVID-19 pandemic lockdowns between March and December 2020, Dean worked with her longtime friend and collaborator Martyn Ridgewell, to design and produce the objects remotely in Berlin and Cornwall, often sourcing materials and facilities locally. As a result, many of the objects are not commercially produced but made by hand. The title is taken from a letter from Claude Monet (1840–1926) to Camille Pissarro (1831–1903), dated 9 January 1900, which appears to say ‘hate tacita’.
About the artist
Tacita Dean is a British European artist born in 1965 in Canterbury. She lives and works in Berlin and Los Angeles, where she was the Artist in Residence at the Getty Research Institute (2014/2015). Dean has been the recipient of numerous prizes including the Sixth Benesse Prize at the 51st Venice Biennale in 2005, the Hugo Boss Prize at the Solomon R. Guggenheim Museum, New York, in 2006 and the Kurt Schwitters Prize in 2009.
Important solo exhibitions include ‘Antigone’ at Kunstmuseum Basel, opened to the public from this August. Solo exhibitions were recently held at EMMA - Espoo Museum of Modern Art, Finland (2020); the NY Carlsberg Glyptotek, Copenhagen, Denmark (2019); Moody Center for the Arts, Houston, Texas (2019); Serralves Museum, Porto, Portugal (2019); Kunsthaus Bregenz, Austria (2018); The Fruitmarket Gallery, Edinburgh, Scotland (2018). In 2018, she made history when her exhibition LANDSCAPE, PORTRAIT, STILL LIFE took place simultaneously across three London museums: Royal Academy of Arts, National Portrait Gallery and The National Gallery. In 2011, Dean produced the work FILM, as part of the Unilever Series of Tate Modern; the work shown in the Turbine Hall marked the beginning of her campaign to preserve photochemical film.
The Dante Project will run from 14 to 30 October at the Royal Opera House, London.