Return to Vienna - The Paintings of Tess Jaray (solo) 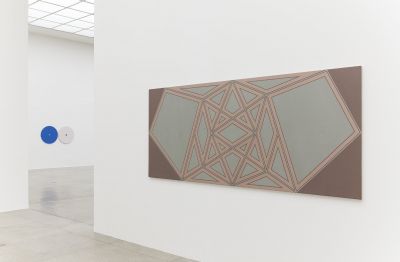 For over sixty years, Tess Jaray has made formally austere paintings, dedicating herself to an analysis of the relationships between painting and architecture, between picture and beholder. Given that her oeuvre spans such a long time, a conventional retrospective would hardly have been uninteresting. Yet in Return to Vienna: The Paintings of Tess Jaray, the British artist with Austrian roots chose to present something different: a selection of twenty-five works, the majority dating from the past several years, that shed light on current concerns in her art such as her investigation of the art-historical tradition of the circular painting.
These recent pictures are flanked by an ensemble of five paintings from the 1960s, the period in Jaray’s oeuvre when she devised her unmistakable personal visual language: a nonrepresentational and formalist painterly practice that employs basic geometric shapes, patterns, repetition, seriality, precision, and linearity to chart the manifold interactions between painting and space, color and surface, form and content, perception and emotion.
Jaray’s art reflects diverse influences that are explained by her unusual life: born to Jewish parents in Vienna in 1937, she grew up in England in a family of émigrés, steeped in the culture in which her parents had been raised and which they continued to treasure in their adopted homeland. Klimt, Schiele, Kokoschka were formative in her education, subsequently rounded out by her immersing herself in the work of the German Expressionists and, as a student, the American Abstract Expressionists.
Two cultural encounters have been her constant sources of inspiration for decades, encouraging her to develop her own style, and both have left traces in the works on display: her studies of the paintings and architecture of the Italian Renaissance—the painter Piero della Francesca, in particular, has cast a lasting spell over her—; and her fascination with Islamic art, which she explored on travels to Morocco and later to Syria and Jordan in the 1980s. Rather than replicating these influences in her works, Jaray subjects them to an intellectual, emotional, and intuitive transformation before integrating them into her characteristic visual idiom.
The works in the exhibition, most of them in large formats, play with basic geometric shapes, simple patterns, color fields in harmoniously balanced hues, or vigorous chromatic contrasts. They aim at visual effects such as illusions of depth, afterimages, and optical shimmering while stimulating the mind no less than the senses—in short, they demand focused contemplation. The titles offer cues for interpretation; some are descriptive (Seventeen Small Squares, 2018), while others hint at a process of artistic research (Discovery & Proof, 2018) or architectonic references (Citadel, 2017) or evoke a mood (Victory, 2019). The drawing—as study, sketch, and draft—is an indispensable aid in the artist’s work on her paintings, extensive printed oeuvre, and designs for public spaces. The artist’s book published in conjunction with the exhibition presents a survey of her graphic output between 1960 and 2000.
www.secession.at