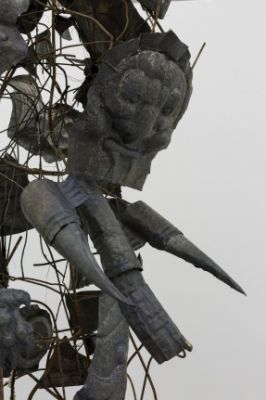 Luhring Augustine Bushwick is pleased to present A Composite Leviathan, an exhibition of new and recent work by twelve emerging artists from China. The diverse practices of these artists defy clear categorization, but are united through a shared investigation into the rapidly transforming landscape of contemporary culture, including the impact of emergent technologies, globalization, and urban sprawl. Organized in collaboration with James Elaine, the Beijing-based curator and artist, this robust exhibition will introduce the New York audience to a new generation of contemporary Chinese artists. Featured in the exhibition are works by He Wei, Jiu Jiu, Liu Dongxu, Liu Fujie, Nabuqi, Wu Di, Yang Jian, Zeng Hong, Zhang Miao, Zhang Ruyi, Zhang Xinjun, and Zhao Yang.
Jiu Jiu 赳赳 (b.1986, Lanzhou, Gansu Province) and Zhang Xinjun 张新军 (b. 1983, Zhengzhou, Henan Province) create immersive video works and installations that reflect their reservations about advancements in technology and urbanization, examining the discomfort and isolation these forces create. Ranging in style from abstraction to figuration, He Wei 何伟 (b. 1980, Ürümqi, Xinjiang Province), Wu Di 吴笛 (b. 1979, Beijing), Zhang Miao 张淼 (b. 1985, Beijing), Zeng Hong 曾宏 (b. 1974, Chengdu, Sichuan Province), and Zhao Yang 赵洋 (b. 1970, Siping, Jilin Province) explore various painterly concerns, spanning from formal investigations to the expressive narrative potential of the medium. The sculptures and installations of Nabuqi 娜布其 (b. 1984, Ulanqab, Inner Mongolia), Liu Dongxu 刘冬旭 (b. 1983, Xi’an, Shanxi Province), Liu Fujie 刘符洁 (b. 1983, Handan, He Bei Province), Yang Jian 杨健 (b. 1987 Xiapu, Fujian Province), and Zhang Ruyi 张如怡 (b. 1985, Shanghai) draw on materials and objects from daily life, referencing their simultaneous strength and vulnerability in the face of a changing environment.
In Biblical terminology "Leviathan" is a dark creature of immense size, like that of an island rising out of the sea that cannot be subdued by mere man alone. It also can refer to anything of enormous proportions and formidable power, such as international corporations or totalitarian states and their vast bureaucracies. In Yang Jian’s sculpture, A Composite Leviathan, which inspired the exhibition’s title, we see a relic of an intimidating yet tottering state system composed of distinct elements sourced from disparate public spaces and monuments. It is a jigsaw puzzle of incongruous elements that don’t fit together quite right, but beautifully reveal the twisted metal structure within. I was reminded of Leonard Cohen’s lyrics: “There is a crack, a crack in everything / That’s how the light gets in.” The “cracks” in the sculpture’s armor are like the lines that have drawn this exhibition together. The focus of the show is not political, thematic, religious, or stylistic; rather it showcases a community of dispersed artists who are working in diverse methods, living in a conflicting system of flux and control, and drawing the “lines” that let the light in.
– James Elaine
About James Elaine
Elaine’s career has focused on creating platforms for emerging artists. Prior to his 2012 founding of Telescope, a non-profit project space in Beijing that has given many Chinese artists their first exhibitions, he served as the Selection Shows Curator and Viewing Program Coordinator for the Drawing Center in New York and the Hammer Projects curator at the Hammer Museum UCLA, in Los Angeles. Elaine is the winner of the 2008 Ordway Prize for his lifetime curatorial work.