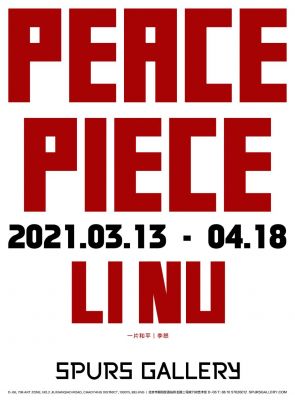 SPURS Gallery is honored to announce its first major exhibition “Peace Piece” in the year of the Bull, on March 13th, by Chinese artist Li Nu. “Peace Piece” will present 13 new works by Li across both galleries I and II of SPURS Gallery. This also marks the inaugural collaboration between the gallery with Li Nu. The title, “Peace Piece,” is a play on sound and semantics, and stands as both a restrained recounting and a muted call. The artist’s coinage of this title is rooted in the situation facing humanity today, and outlines the primordial landscape that lies concealed behind the clamor of the contemporary world.
The exhibition sifts through the artist’s past projects as a foundation, with spontaneous returns to and derivations on his important works, while refining the living themes that have been a constant in his practice: the probing of the meaning of the land, the body and the will, how different ideologies shape individual existence, how to maximize individual freedom under different systems, and the artist’s tracing of the origins of the whys and what-fors of art. Li has never shied away from those thorny, difficult, yet essential, unavoidable questions. In his constant performance actions, shockingly massive sculptural materials, study structures and constrained, cathartic and satirical language, he places himself within a broader spectacle of reality to seek resonance with our era.
In Gallery I, the work Air on the G String takes its title from the celebrated composition by Johann Sebastian Bach, and straddles the front and entrance of the exhibition hall. This massive wishbone sculpture straddles the China–Mongolia border to reference a much broader territory. On December 31, 2019, the artist presented his work Iron Curtain on the China-Mongolia border, drawing water from beneath the ice on the Kherlen River at the border to form a frozen wall dividing the river and the land, in two parts. The face of the wide bronze sculpture is inscribed with the phrases “Wenn meine seele zum tränen änfangt（When the spirit cries）” and “Что делать (What do we do?)” in German and Russian. These words come from Hans Konrad Schumann, the East German soldier who leapt from the Berlin wall, and from famous Marxist Vladimir Lenin. A wheelchair made from a chair and a bicycle is placed in front of the sculpture, while the body of the sculpture has been filled with tons of lamb fat, squeezing a powerful explosive potential into great patience. The sculptures Rift and Burning River pick up the thread of Iron Curtain and carry it in different directions. The constant references to “borders” throughout the gallery space construct a more sweeping range of territory and historical imagination.
Gallery II takes on a deeper focus on individual existential unease and identity anxiety, dissecting the ways in which “sculpture” and “shaping” truly occur. Beat is aimed at revisiting the discussion of sculpture to uncover new possibilities in sculptural language, and extensions into and between the body, sculpture, performance and film:, which in Li’s word is to “blur the boundaries between them to respond to the complexity of the day”. He has thus pointed out a dilemma of reality, while striking back at it with great ferocity.
The exhibition will be on view until April 18.