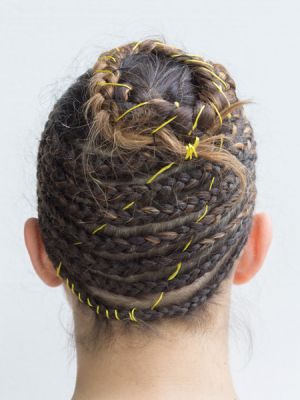 What interests us in our proposal is the idea of displacement, concatenation, permutation, mobility, transfer and correspondence, and of trajectories that the main idea encompasses in a subtle manner. Circulation is a term whose etymology finds its root in Latin circulatio. In other words: the act of moving in a circle, or in a course that brings the moving body to the place where its motion began. The act of passing from place to place or person to person. For this reason, the focus of this exhibition is more on the dynamics that govern the conditions under which the works are produced and the present that inspires them. And what inevitably results from this is the causal loop effect involving information or objects that over time shift value and ultimately make sense. Another term that we would like to revive is the predestination paradox used in the Star Trek series to speak of a “time loop” in which a traveller returns to the past to try to prevent an event from occurring, but ends to provoke this event.
Since 2015, Hana Miletić has been developing a weaving practice that, on the one hand, allows her to reconnect with a craft stemming from the female genealogy of her family and, on the other hand, allows her to invest in weaving’s metaphorical social implications. Her woven textile works make the link between manual and automated work, between locality and industry and technology. Weaving as a technique creates a continuous loop between the head and the hand, which constitutes a kind of circulation.
Marina Pinsky‘s work examines the contours of our visual culture. The relationship between object and image in her work is materialized in the form of highly individual experiences, where interpretation eludes linear interpretations by using free association. Pinsky develops he rstories in stages in which each of the subjects is transposed like a puzzle, spatially and materially. The mise en abyme is a working method that balances the socio-historical signifiers of the past and the present.
Pusha Petrov uses photographic imagery wisely, skillfully observing the intimacy of people and highlighting the details of their daily existence and their specific attitudes that lead to preserving the singularity of each. By taking pictures of gestures, objects or inhabited spaces, she symbolically shows the ordinary context of people, offering a sociological and aesthetic reading of ways of life.
Daniel Otero Torres maintains certain ambiguities between drawing and space, drawing and photography, the original and the copy, the viewer and the watched: the amalgam remains at the center of his approach. At the center of his work is the complete reinterpretation of photographic images through his pencil drawings.
Kasia Fudakowski explores social enigmas through a surreal logic and a burlesque humor. Her work often addresses the absurdity of certain accepted logics. The process gives rise to a progressive deconstruction. She uses the genealogy of the comical to manipulate expectations and criticize conventional social structures.
Peter Kogler has unquestionably collected all the ingredients of a system whose criteria could be meticulously listed, but he is undoubtedly one of those few who arrive at a constant aesthetic overtaking because he never lets himself go into a position of entrenchment; on the contrary, it bites on the margins and expands the contours of its own geography. For what he undertakes each time is only a clear desire to differ, to move, to slide, to thwart, not in the sense of the arrangements with the same but in the pure dialectic of the progress of the modern.
Parallel to the gallery exhibition, a special presentation will take place in Schleifmuhlgasse’s project space. Fatality 2011, by Adel Abdessemed, is an installation of seven standing microphones, from Murano glass, from which one could no doubt roll out many metaphors. For example, on the fragility of speech and information. Or perhaps it is to show that everything that affects the media loses its substance and becomes transparent? Drawing a line between collective memory and direct experience, in his work Adel Abdessemed raises the central questions of humanity, both through contemporary politics, history and events in his own biography.
Ami Barak