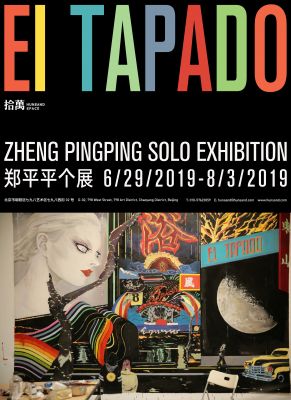 EI Tapado - Zheng Pingping Solo Exhibition will open on June 29, 2019. The word "el tapado" comes from the classic detective novel The Long Goodbye written by the late American writer Raymond Chandler, which means "buried treasure" in Latin American Spanish.
In the exhibition, “el tapado” appears as the name of a painting and the exhibition, which will entrust the meaning – a new place name related to reality and dream, the fantastic fertile soil buried in memory and consciousness. Although the medium of the artwork is very conventional - conventional painting, traditional technique. But for the "wishful thinking" of the “world”, the "naming-rights" of a new field will be exciting forever.
Well, let's just see about that.
Zheng Pingping was born in Zhejiang Province in 1983. He graduated from China Academy of Art in 2007 and now lives and works in Beijing. Recent exhibitions include EI Tapado – Zheng Pingping Solo Exhibition (2019), Hunsand Space; Facing the Wild Future (2016), Hunsand Space; John Moores Painting Prize (2014), etc.
Hunsand Space is founded in 2014, in No. 211 Caochangdi Art District, and is relocated to the 798 Art District in 2018. In keeping vigilance with the conventional ways of presenting art exhibitions in the white cube, Hunsand Space aims to take the semantics and syntax from the language of contemporary art as a point of departure, and expand them into broader fields. Through its vigorous programs of exhibitions and projects, it hopes to stimulate the overlooked aspects in contemporary culture, and brings the values of contemporary art into our lives.