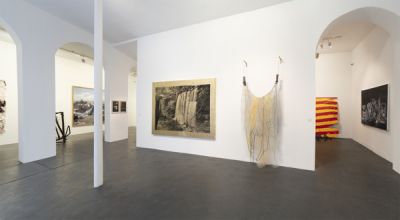 With the gallery’s programming being disrupted by health restrictions due to the Covid 19 pandemic, it is difficult to maintain the schedule of shows by artists who are prevented, for some of them, from creating as they wish and especially from travelling to their own opening in Paris.
Therefore, in order to meet the wishes of the even more numerous amateurs who have visited the galleries in recent months, notably due to the museums’ closure, we have decided to organize a group show starting February 11th. Favourable to time and reflection, this unprecedented period, without travels or fairs, has allowed us to look closely at the works that we keep in the gallery but to which we cannot always offer the visibility they deserve.
While observing and confronting these works, we were surprised by the connections that have emerged between artists represented by the gallery since the 1990s, such as Manuel Ocampo, Fiona Rae and Jessica Stockholder, and those who have more recently joined the programming, Laure Prouvost, Benoît Maire, Wang Keping, Brook Andrew or Nú Barreto.
In one way or another, each of these artistic propositions has something to do with the health, ecological, but also economic and political context of our time: we have seen many echoes to our own concerns, in relation to the current world situation. This attention to the upheavals in society is undoubtedly one of the guiding threads of the gallery’s artistic choices.
Through very different practices, photography, painting, works on paper, Valérie Belin, Rosson Crow and Joris Van de Moortel translate a form of contemporary excess, that of a confused, frenetic and vain accumulation, underlining the urgency of an ecological awareness. This anguished vision of a world running towards its loss is the subject of an expressionist treatment by a number of artists: in Chairs grises, Jérôme Zonder recreates with his own finfer prints a crowd of ashen hands, recalling the darkest episodes of History, the Com Pell tapestry by Josep Grau-Garriga reveals a raw use of the textile material, expressing a nostalgic rurality, while Meuser experiments in a sculpture made of recuperated steel a convoluted and tortured form.
The assemblage of the most diverse materials becomes the vector of a message with political contours: common denominator of the works of Rina Banerjee, Rodrigo Matheus and Jessica Stockholder, it opens a vast field of possibilities from which emerges the anxious feeling of a civilization clash and a wasteful or chaotic modernity.
his dark vision of the world suffocates Brenna Youngblood’s painting, created in a miserable Los Angeles, takes a political turn in Nú Barreto’s dystopian work and a social one in Luc Delahaye’s immense photograph, who pursues a reflection on the human condition in the contemporary world. Manuel Ocampo also conveys in his painting Untitled (Ghost Teeth) a burlesque and nightmarish feeling of life.
In contrast to this representation of an impoverished or dried-up land, a number of artists pay tribute to the resources of our ecosystem : Fabrice Hyber approaches the climatic stakes with an overflowing and inspired fantasy that nourishes a utopian project, that of «inhabiting the forest». Through the cutting of wood, Wang Keping operates a primordial return to nature, which constitutes the matrix of his sculptures, Laure Prouvost’s work Grated Shovel is a whimsical invitation to dig tunnels in the earth while Agnès Varda’s photographs embrace with poetic charm the motif of the potato, «the most modest of vegetables», «symbol of a life that is constantly renewing itself».
At the image of the generous and fertile ecology that Fabrice Hyber calls for, the research of a certain number of artists thus tends towards the invention of a hybrid, fanciful, «tinkered» world, where dreaming is still possible. The works are offered as many possible paths towards a rebirth, like Fiona Rae’s painting where flashes of color cross the dark matter and Andres Serrano’s photography, a touching image of arid and bare vegetation, yet full of hope. Also Sarkis’ stained glass invites to contemplate the sky, however caught under a lead drawing that may look like a scar, while Benoît Maire’s Cloud Painting switches from an incandescent and alarming vision to a soothing onirism.
In this balanced universe, Brook Andrew’s work, depicting a waterfall in Tasmania known to shelter the oldest trees on the planet, illuminates the course with its melancholic serenity.